I’m now in Lhasa at 3700 meters above sea-level … Tibet is a great place, where even the lowest laying area is higher than Norway’s tallest mountain. You quickly learn to calculate where you’re going in Tibet. Not how far it is, but how high it is. If you’re not careful you could meet death’s cold embrace in the form of Acute Mountain Sickness (AMS). When we came here (I say we, because I’m traveling with Torstein, a buddy of mine from Norway), we had to spend 3 days in Lhasa just to acclimatize to the height. We were lucky because we didn’t have much trouble, unlike many others. Normal sympthoms of AMS include headaches, dizziness, loss of appetite, nausea, breathlessness and irritability. More severe sympthoms  are coughing pink froth, severe headaches, lack of coordination, confusion, vomiting and eventually unconsciousness. If you don’t listen to these symptoms, death can and usually will follow.

We were on the 9th official train ever running on the newly opened railroad to Lhasa. It was quite interesting to be on the 48 hour train ride there, because people were getting sick (literally) left right and center and towards the end of the journey so many people were getting oxygen that it felt more like a hospital train than anything else. We had no problem on the train, but decided to spend 3 days in Lhasa to acclimatise. We spent the time seeing the obligatory sights, which were all amazing, but after them it was time to extend our sight-seeing. 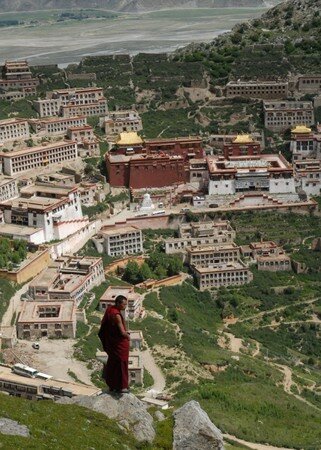 We headed out to 4500 meters above sea-level to a beautiful monastery called Ganden. It was fantastic with recently installed golden roofs … 400 kgs of it donated by the Chinese … which is the least you can expect as they had shelled, mortared and bombed the place to ruins during the Cultural Revolution. While we were busy exploring the many sights, we noticed that a large number of monks were heading up into the mountains, so we decided to follow them. 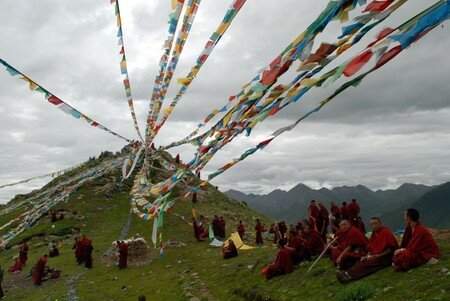 After a long and strenuous climb we were lucky enough to witness a once yearly ceremony of chanting, singing and praying on a mountain top. It was AMAZING! After it, I chatted with a whole bunch of monks and ended up enjoying some yak butter tea in one of their rooms. Very cool.

When we got back from the daytrip to Ganden, we packed our bags and prepared for our first trek. Early the next morning we shot off to a place called Damxung, where we headed into the mountains towards a pass called the Kong-la pass. The first few hours of trekking were nice and smooth with beautiful scenery. It did however get tougher and tougher and tougher. By the time we got to some shepherds at around 5000 meters, we were both displaying symptoms of altitude sickness. Speaking for myself, I had a throbbing headache and had no control of my emotions and actually started crying when the shepherds came out and smiled to us. I was really tired, but still coherent and knew what was going on, but I really wanted to rest and lie down to sleep. We had barely come up to their tents before a heavy hail storm blew in. They were kind enough to let us stay in their tent while the hail inferno passed. Growing up on Norway’s west coast I’m used to the weather changing fast, but Tibet has us beat by severity, fierceness and rapidity of the changes.

We were too exhausted to go on and debated turning back, but because the shepherds were so friendly, we put up our tent and I crawled into the sleeping bag and rested for 14 hours. Torstein chatted a bit with them, before he too crashed. Our mistake of the day was pressing on way too hard. Had we walked at a slower paceand most importantly rested at a lower altitude, we would probably not have felt anything. This was unfortunately not the case, but it was a valuable lesson. The next morning we felt slightly better and after forcing down a hearty breakfast of beans and sausages we forced ourselves onward. We climbed through the highest point in the pass at 5240 meters 2 hours later. As soon as we started climbing down, our spirits soared, our headaches disappeared and we could move a lot faster.

We continued our descent down to 4700 meters where we camped at a huge and beautiful salt water lake called Nam-tso. We camped in a serene spot with no one around. We ate a nice noodle dinner, ate a snickers and rested. It was excellent. The next day we had a lot of extra energy, so we used the time until our transport returned to take pictures and walk around. 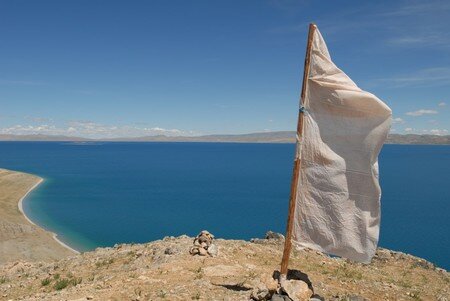 Upon our return to Lhasa we meet with Isa and Dave and enjoyed a nice dinner. There was no rest for the wicked, because already the following day we headed out again. This time we had our course set for Everest. We ran in to the following three people when we were around exploring in Lahasa.