Through the Panama Canal 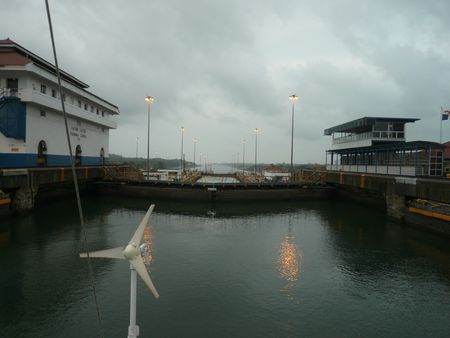 We were more than finished with Colon when the Canal Autority finally gave us the green light to go through the Canal. We were going together with a small flotilla of boats that they had delayed for a number of days. When I went to settle my bill at Shelter Bay Marina I scrutinized the bill, because I had heard that they were good at adding things to the bill that didn’t belong there. It’s a good thing I did, because they had added over $100 and because they weren’t awake, they forgot to charge me for the last day, so in total I saved $150. Great success 🙂

Going through the Panama Canal for sailboats works as follows: On Day one, you anchor at the flats, wait for your advisor, when he shows up you go through the Gatun locks, which dumps you up on the big lake between the Caribbean side and the Pacific side locks. When you come up on the lake you anchor on Gatun Lake, about 1 nm away from the Gatun locks (very creative naming). It’s quite normal to have a few drinks to celebrate that you’re finally out of Colon, but you can’t drink too many, because on day 2 the advisor shows up at 6 am and you motor to the Miraflores locks, where you go down to the Pacific. The trip on the lake takes about 4-5 hours, depending on how fast you are. It always ends up being slower than the Canal Authority calculates, because all sailboats going through lie about the speed they can for engine, out of fear of having to pay extra. Basically everyone tells the authority they can do 8 knots, when most do in the vicinity of 6. Anyways, once you go through the Miraflores locks you find yourself in the Pacific.

When we motored away from Shelter Bay Marina and dropped the hook off Cristobal, we had no illusion that the advisor would be on time, in fact we would be positively surprised if he showed up at all, after all the waiting and delays the Canal Authority had put us thrugh. While enjoying a cold beer, I chatted with Mike on Quartermoon and on the off chance that we actually went through the Canal, we agreed to raft up while going through the locks, because it’s always easier when you know the captain on the other boat. We didn’t have to wait long and were actually dumbfounded when the advisors showed up on time. We sped off to be early into the locks. The key thing to keep in mind when going through the Canal is that if there are two groups going through, you need to be in the first group, because if you lock through with the second group, it means that you won’t get a mooring on the lake. The last thing you want to do is to drop your anchor on Gatun Lake, because when they demmed up the valley and created the artificial lake, they didn’t cut any trees, so when you drop your hook there’s all sort of huge nasty trees to foul your anchor on. We were lucky though, because we got in with the first group and would be guaranteed a place on the moorings on the lake. Going through the Gatun locks was interesting, made extra so, because I had a bit of pressure on my shoulders, because I was the middle boat. When you go through the Canal, they make what they call a raft, out of 3 boats. It is basically 3 boats tied alongside eachother. The one in the middle is responsible for propulsion and for steering the raft in and out of the locks, while the outside boats take care of the linehandling when in the locks. We had Quartermoon on our starboard side and some Belgian boat on the other. It worked flawlessly and we passed through the 3 Gatun locks without any problems. Once we were on the lake, we split up and headed at full speed to the moorings to make sure we got one, which we did. Again we tied up with Quartermoon, which turned out to be a great move, because after we had eatend dinner and played som RoboRally we had one Hell of a party which lasted till 3 am … which isn’t the smartest thing to do when you know the advisor is showing up at 6am to take you to the Miraflores Locks. Our excuse was that it was Mike’s birthday, so we needed to celebrate it in style … which we did … The pictures the next day revealed that we had used our emergency strobe lights and glow sticks to create a proper club feeling. It was quite fun to motor on the lake … We were lucky because ALL the other boats on the moorings sped off at full speed the next morning at 6 am, while Quartermoon and us came at a more leisurely pace. We even managed to put up some sail on the lake, to help us conserve some fuel. When we got to the Miraflores locks all the other boats had been forced to wait for us, so not only had they burnt more fuel, they didn’t get through any faster … and I think most of them knew that Quartermoon and us had enjoyed a bit of rum the night before, so they weren’t in a hurry to hand out hugs to us, but it didn’t matter. We rafted up with Quartermoon on our Starboard side and because everyone else had rafted up while they were waiting for us, we didn’t get a boat on our port side.

Just like at the Gatun locks, everything went flawlessly and before we knew it, we were on our way into the Pacific. We had been told about some webcams that would capture us going through the locks, so we were waving like idiots at every pole and tower with a camera, only to find out that no one at home had been watching. After 3 locks we were finally in the Pacific. We dumped our tires with Stanley at Balboa yachtclub, before we headed out to the La Playita anchorage where we dumped the anchor and proceeded to have our first (of many) Pacific anchor drams. 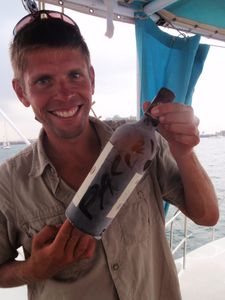