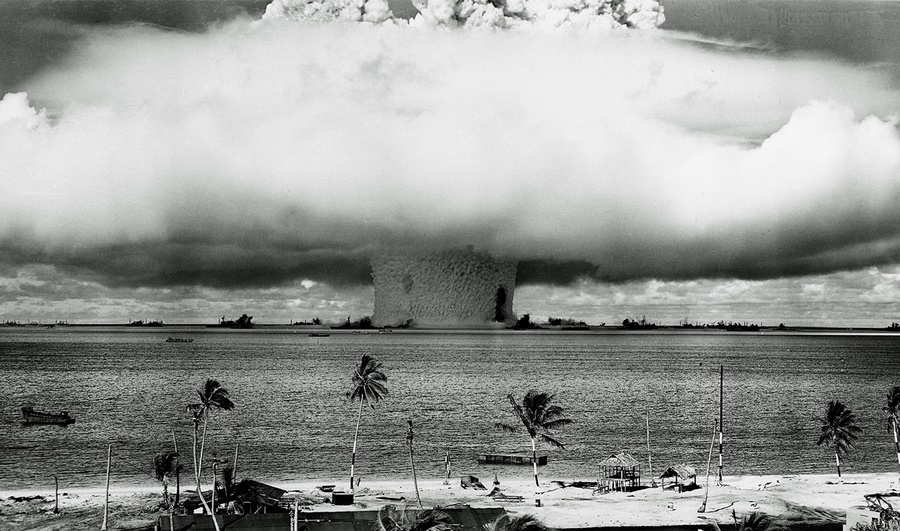 You would think that your place in Hell would be assured, if you had been busy testing nuclear weapons in paradise. When I say South Pacific, most people think of atolls with small sandy islands covered by palm trees, surrounded by vibrant coral reefs and an abundance of tropical fish. They would all be correct. In my opinion the area we’re sailing in now may be as close to paradise as it is possible to get, so you would think that this is as far away from anything warlike it is possible to get, but then you would be wrong.

When we were on Gambier I spoke to a few local Polynesians about sailing to some of the atolls before getting to Amanu, which would be our first stop in the Tuamotos. The locals told me that it was difficult to stop on some and impossible on others. It was difficult to visit some atolls, because they had no opening in the encircling reef and anchoring off the reef can be both treacherous and dangerous. I was more intrigued by the atolls it’s impossible to visit, because few things in life are truly impossible.

Do the Mururoa and Fangataufa atolls mean anything to you? They should! They are impossible to visit, because French authorities forbid it. Up till 1996 the French were busy testing nuclear weapons in paradise and Mururoa and Fangataufa were where they did it. They had been busy blowing up 181 nuclear bombs there from 1966. So for 30 years, they were busy decimating this paradise with some of the most deadly and dangerous weapons known to man.

Here’s what Greenpeace wrote about the first test done on July 2nd 1966, codenamed Aldebaran, when the French exploded a plutonium fission bomb in the Mururoa lagoon. All the water was sucked out of the lagoon and it was “raining dead fish and mollusks down on the atoll”. The atoll has a surface area of 148 km2 with an average depth of 30-50 meters, so that’s quite a feat.

They did not limit themselves to surface or below ground testing, but exploded a total of 41 atmospheric nuclear blasts, ensuring that the entire region from Peru to New Zealand were affected by contamination. In French Polynesia that effects were widespread and felt. Besides the obvious that two atolls are forever contaminated and destroyed by the testing, and therefore have to be closed off to the outside world is one thing.

Fishermen in surrounding atolls complained of mutated fish, large amounts of dead fish, unedible fish, dying coral, etc. Just as alarmingly, doctors working in French Polynesia have found much higher instances of cancer amongst Polynesians living close to the Mururoa atoll. A telling indicator that not all is as it should be is that the French military did extensive tests on the effects their nuclear testing had on the local population and refuse to release the results.

The nuclear testing also caused other, more unforeseen problems. Gambier was used as a logistic base for the nuclear testing. In order to get cargo ships in to Mangareva, the French military blasted away coral and dragged a chain through the coral reef to allow access for deep draft vessels. When they damaged the coral, ciguatera toxin was released and almost all of the fish on Gambier suffer from ciguatera poisoning. The difference is huge: elsewhere in French Polynesia you can eat any fish you catch, while in Gambier you can only eat two, unicorn and surgeon fish, if you eat any other fish you get ciguatera poisoning.

I am appalled that anyone would be testing nuclear weapons, but if you don’t have enough balls to do it in your own back yard, but have to go to a “colony”, it means you know the dangers and don’t want to inflict it on your own population, so you do it on one you have subjugated.

I was hoping that this would be an isolated French occurrence, but I was just setting myself up for disappointment: The US also had no regard for paradise and set off 105 atmospheric tests in the Pacific Proving Grounds, in the Marshall islands. What’s interesting to note is that the 105 tests done there were only 14% of all US tests done, but they composed nearly 80% of the total yield (or strength) of all their nuclear tests. So they set off the weak stuff at home, saving the powerful and deadly explosions for paradise. The fallout reached most of the globe with traces found in Australia, India, Japan, US and Europe, but naturally the worst afflicted were the locals in the Marshall islands. Some locals were way too close and suffered from severe radiation sickness, because they had not been evacuated far enough away from the test sites. The US used them as test subjects in secret experiments to document the effects of radiation sickness and exposure. It makes for horrifying reading.

The British also lacked the stones to test at home and instead did tests on the Kirimati atoll in the Line islands and also turned to Australia and did a few tests at Maralinga between 1956-1963 and then did the rest of their testing in the US.

Testing nuclear weapons in paradise wasn’t an isolated problem, the French, the US and the British all did it and though it luckily ended in 1996 the effects are still felt down here. The anger is still present when you talk to Polynesians about it. It makes you wonder what kind of a person would take a look at this paradise and conclude: I’m going to test nuclear weapons here!

We’re now anchored in Hao, which was the administrative center for the French testing on the Mururoa and Fangataufa atolls. It used to have a large French naval presence, but that’s all been dismantled and the locals have taken over again. When you look around you, while you swing leisurely at anchor, there’s little to remind you of Hao’s importance in testing nuclear weapons in paradise. When you scratch the surface you find a scab that the locals are more than happy to talk about and it usually ends with them saying that no one but Polynesians themselves should govern themselves and their areas, because then something like the nuclear testing would never have happened. Instead a new menace lurks, but read more about that here.