Tearing up the West Stepping off the plane in San Diego felt great. The temperature was comfortable, especially compared to freezing Beijing, and I had just embarked on a fantastic 5 week vacation filled to the rim with adventures and fun stuff.

I’m dividing the trip up into five segments:

1. Tearing up the West

5. Hanging out in New York

This is part 1, Tearing up the West

Joe met me at the airport and after hugs had been exchanged we shot straight back to his hood to devour a large very tasty Mexican meal at Miguel’s. Seafood Fajitas was washed down with a couple of drafts of Dos Equis. Ahhh … I was definitely on vacation. We used the time to catch up, because the last time we met Joe visited me in Norway for some proper Norwegian style mayhem … Our success can be measured by the fact that he missed his flight back, amongst other things =)
I was fairly tired from traveling, so we soon called it the night and went to bed.

Joe worked till about noon the next day, and then we packed up his car and set off for Las Vegas. We got there just after dark and even though I had seen pictures, films and TV from Vegas, nothing prepared me for the sight that appeared on the horizon. It was a spectacle of lights and delights.

Joe had booked us into the Monte Carlo and had made an appointment with Shyla (an old colleague of ours from when we worked for NCL in ‘96-‘97) to meet up for dinner. We didn’t have a lot of time, so we showered, changed and jumped in to a cab to the Venetian. The taxi sped though the streets and my jaw got closer and closer to the dashboard the further we got. Vegas looks amazing at night.
At the Venetian we met up with Shyla and a crew of girls and one other guy. They were all colleagues and worked as respiratory therapists. Tonight they were out doing a post marriage bachelorette party (yea, you figure it out!) Anyway, they were out to party, but before the madness could commence we enjoyed an excellent meal at the Grand Lux Cafe in the Venetian. The food was excellent. I believe the restaurant is part of the Cheesecake Factory franchise. We certainly weren’t disappointed.
After dinner we had a quick cocktail in the girls room, before we surprise, surprise headed over to the Olympic Gardens Strip Club. The girls wanted lap dances and Joe and I “reluctantly” tagged along. We even managed to get in for half price ($15 p.p.) so it really worked out well. We didn’t stay too long, nor blow too much money there amazingly enough. Next we did the most economical thing of the entire evening. We headed over to Polly Esther’s in the Stratosphere Hotel. They had a deal where if you paid $40 you could drink for free. Seeing that we were a large group we haggled the price down to $30 per person, but because of a lot of confusion at the door, only I ended up paying. When we got in, I got drinks for everyone and all of us got completely destroyed for a grand total of $30. Not bad! The next day Joe and I had plans to get up early and shoot out to do some hiking at Bryce National Park. Needless to say that proved a bit ambitious. In fact the only thing we were capable of doing was checking out of the hotel and driving up to Shyla, where we chilled the rest of day. Towards the evening we felt better, so we dropped by REI, so that I could pick up some necessities for the Ecuador trip. We also went down to the Strip again, so that I could take some pictures. The rest of the evening was spent talking and eating pizza. A chill day meant that we could set off before 7 the next morning. We

hit the road towards Zion. Originally we were planning to go to Bryce, but after several recommendations for Zion, we changed our mind and headed there. As soon as we got there we went for a drive around to get our bearings. Then we parked the car and hiked up to the Emerald Pools. It was gorgeous there. After the relatively mellow hike, we headed down to Springdale where we got a room at the Zion Park Motel. Springdale is a cool little town where they do everything to keep their relatively rustic image. It’s very cool. We ate a couple of juicy burgers and headed over to the Bit and

Spur where we enjoyed a couple of beers. To our surprise we had to order food in that bar as well. It’s the law in Utah: You can’t ONLY drink in a bar, you also need to eat. Thoughtful of them! We ended the evening by buying a six-pack of a local brew along with a bag of Doritos that we tore into while watching Hamburger Hill on TV. 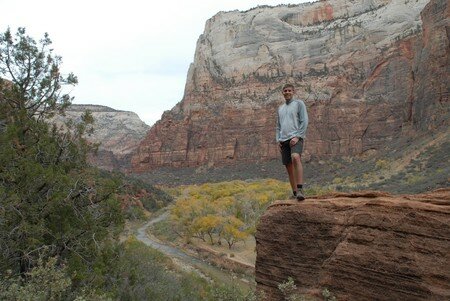 The next morning we were also up at 6 a.m. and in the car after an awkward shower (the nozzle came out of the wall at navel height, so unless you were a dwarf, showering required some acrobatic bending). Instead of doing an early morning hike in Zion we shot off to the South Rim of the Grand Canyon. We would have loved to have stayed in Springdale and Zion, but time didn’t permit it. The sunrise drive from Zion to the Grand Canyon was awesome. The scenery was something out of this World.

Once we got to the Grand Canyon we changed into our hiking attires and set off. We had our eyes set on the Plateau Point: A 20 km (12.2 miles) trip that takes 3 – 4 hours one way due to the big difference in elevation. We started at 1:15pm, with the sun setting at 5:30pm we didn’t have a lot of time. The hike down was a breeze since we only carried water and a camera. The Plateau Point was … incredible. When you stand on the tip (which I did) you have an 1177m (3860ft) straight drop behind you. Forget the pictures you’ve seen: it’s more than enough to give anyone sweaty palms and trembly legs. After taking a few pictures and refilling our water bottles, we hurried back up. We did the whole trip in 4 hours and 45 minutes. We made it up just as it was getting pitch black. Perfect timing! We bought a few energy bars and jumped in the car and high tailed it to Flagstaff. There we checked into a motel on Route 66. Feeling thoroughly tired we showered and headed out to eat. We found a great little diner and enjoyed a sensational Chili dog. I was very satisfied. We finished off the evening by heading to the Flagstaff Brewing Company to quench our thirst.

The next morning we were also off at the crack of dawn. We drove through Sedona and Prescott and back to San Diego. We made a pit stop in the desert, so that I could get an obligatory picture next to a huge cactus. No desert trip is complete without it.
When we got to San Diego we went over to the Boardwalk on Mission Beach and went for a walk on the beach. I was experimenting with the camera and Joe and I must have looked like a couple of idiots, because I would crawl around with the camera and then I’d get Joe to scare the birds, so that I could get some nice shots of them in flight. When the sun had set we headed over to La Jolla (pronounced La Hoya) and ate a tasty meal at the Karl Strauss Brewing Company. The next morning I shot off to Miami to continue my adventures there.