I picked up my charter guests: Margrete, Harald, Torbjørn og Per Ove at West Punt, all the way north-west on Curacao in a small bay called Playa Forti. It was a good place to start the charter, because from there we would cover the entire southern coastline heading to Klein Curacao and Bonaire.

We spent the night in Playa Forti and lifted anchor after breakfast, so that we could move 1 nm east to a nice beach named Groot Knip, where we went swimming and relaxing, before we lifted anchor again to head further east. We were planning to sail, but the mainsail halyard wrapped around one of the stays, so I had to send Harald (who volunteered) up in the mast to undo it. It was a quick affair and Harald got a new view of the boat and the anchorage. In the end we struggled to get him down, because he didn’t want to come down. Margrete knew a solution, so when we cracked out the bananas he came scrambling down 🙂 With the main halyard untangled we set sail and shot southwards doing between 7 – 9 knots. The only minus was that we weren’t quite able to sail as high as we wanted and when the wind changed pushing us further out, we dropped the sails and fired up the iron topsail and headed for land. 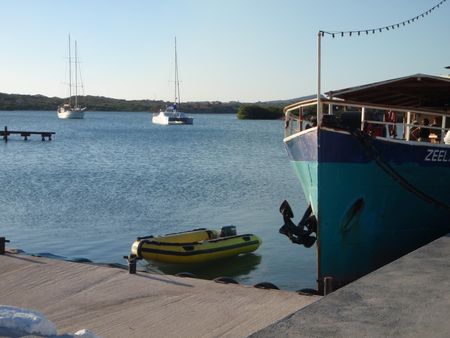 We sailed to Piscadera Baai, where we hurried ashore before dark to provision at Centrum, a great supermarket that had everything we were looking for. The bag boy gave us a lift back to the dock with our groceries, saving us quite a walk with HEAVY bags.

That evening, Margrete cooked up a storm in the kitchen making a delicious Thai chicken dish that was devoured  with great enthusiasm.

The next morning I had to hurry in to Williamsted to clear in and out of Curacao. I was at Customs at 8:30 am when they opened, but when I got to Immigration I got a bit of a surprise: it was Saturday, so they didn’t open before 11. I passed the time at a cafe updating my blog and relaxing.

The customs and immigration officials were nice and both cleared me in and out, so that I wouldn’t have to return to clear us out. I jumped in a mini-bus that ended up driving me straight to the gate of the docks. Fantastic service for only 3 florin. We lifted anchor and motored eastwards towards Fuik Baai … pronounced Fuck Bay … I wonder how it got that name … Hugging the coast line we were able to avoid the worst current and got to Fuik Baai quickly. It proved to be a lovely little lagoon, where we could swim, relax and enjoy several tasty anker drams (A Norwegian tradition of drinking to celebrate that the anchor has set properly). The evening was spent playing Sequence where the captain and the purser proved to be a deadly combination against the Chef and the 1st Officer. Everyone has been assigned duties and positions and Harald is the 1st officer, Margrete is the chef, Torbjørn is the purser and Per Ove is the accountant. I double as Captain and Cuba Libre mixer.

The next morning, Harald cooked up some tasty scrambled eggs with bacon, before we left Fuik Baai and headed to Klein Curacao. The trip over was uncomfortable, because of shelving seas and a strong head current, but we got there in due time. Klein Curacao is paradise lost. The western side is covered by one long beach and it was on this beach we anchored in 3 meters of water. By 4:30pm we were the only ones on the whole island. It feels pretty nice to have an island to yourself. Shortly before nightfall a German boat came and we wondering if they were dredging, because they dropped their anchor and pulled it back up 5 times before they were happy. The holding was in perfect sand and I can only guess why their CQR anchor wasn’t setting. My Rocna dug in quickly and sat superbly on the first try.

We were on our way to Bonaire at 7am the next morning. We were expecting that the 23 nm trip would take a long time with current, wind and waves on the nose, but it went a lot quicker and smoother than expected and by noon we were securely tied up at a mooring outside Klavendijk on Bonaire.

We will spend the next 4 days on the mooring here, relaxing, diving, tanning and enjoying this friendly little island.