The stay on Las Aves was sensational. It had everything a good anchorage should have: A deserted island with a beautiful beach, nice scenery, stunning sunsets and spectacular snorkling. We had made a deal with Ian and Westa, so the first evening we enjoyed a fantastic dinner onboard Marsha Claire. The dinner consisted of a thick lentil soup and a Thai curry. Add beers and good company and it made for a great evening. The following day Claudia and I went exploring, dinghying around the nearby islands, going for a nice walk on one of them and snorkling along the other. In the evening we hosted Ian and Westa for a tasty chicken soup followed by a Rumanian cabbage pork dish. It went down like a house on fire, luckily we had several beers to hose it down. The next morning we woke up to find that wind hadn’t really subsided, wo we were still looking at 24+ knot winds on the nose, for the trip eastwards. We did the only right thing: We waited till it started decreasing as per the forecast. When it dipped below 20, we lifted anchor and set sail. Our intended destination was Isla la Blanquilla, but the wind wanted it otherwise. The wind was simply too strong and too much on the nose for us to make any sensible headway towards it. It was hard sailing in decent sized waves, with true wind peaking around 26 knots and a not of head current, all coming straight from East, which was exactly where we wanted to sail. After sailing for 2 full days and 2 long nights, we abandoned the plan to sail directly to Blanquilla and changed course for Isla la Tortuga, where we anchored off Cayo Herrandura, a tiny island 1 nautical mile northwest of Tortuga. There we enjoyed a calm day of walking on the beach, chatting to neighboring yachts and replenishing ourselves with good food and plenty of rest. In the evening we even squeezed in a movie: Crocodile Dundee. It was perfect. Our rest was disturbed several times in the course of the night by the chain hook dropping off the chain. I at first thought it was caused by us anchoring in very shallow water (about 2 meter depth) and the chain hook falling off when the bridle hit the sand bottom. After reattaching the hook 3 times, every two hours, it was time to lift anchor at 5 am and set sail for Blanquilla. We left Cayo Herrandura in pitch blackness and set course for Blanquilla, but again the winds wanted otherwise. I tried to fire up an engine to see if it would help our course, but it was evident that it was too much into the wind for us to get there without using a lot of fuel and taking a real beating in doing so. Instead we tacked, turned off the engine and shot southeast towards Isla Margarita on an increasingly improving tack. We enjoyed a great day and night of sailing pulling into Porlamar with the rising sun. Porlamar is the only safe anchorage on Margarita. Though after speaking to some people on land I question how safe it really is, because people have been robbed at gunpoint on their boats right there in the anchorage. We spent the day relaxing, eating and gathering strength, before we cast off for Los Testigos. My original plan to sail along Penisula de Paria along the Venezuelan coastline and then tacking when I got the wind from a favorable angle, was quickly discarded when I spoke to some seasoned yachties in Porlamar, who strongly advised against it. Basically if I wanted to meet pirates, get robbed or shot up, that was the way to go. They recommended motorsailing straight to Testigos, which was exactly what we did. The trip took just over 11 hours, motorsailing straight into the wind, waves and current. Otto performed like a champion, which he has been doing ever since I fixed him, giving us time to enjoy the trip there. Los Testigos was exactly what we had hoped: A handful of beautiful islands, with two scattered fishing communities and a coast guard station. We checked in with the coast guard, who gave us 48 hours there, before we will have to push on. Checking in with armed guys who only speak spanish, when you don’t is a challenge, but a big smile and a sense of humor is luckily contagious. After the obligatory rest time and delicious lunch, we went exploring. There was one mountain on the island and we set out to climb it. It proved to be a nice walk to the top, walking through an arid landscape surrounded by cacti, geccos and goats. The view from the top was stunning. In the evening we ate a delicious pasta meal and watched “Catch me if you can”, before we hit he sack. We were thoroughly tired after not only a week of full-on sailing, but also the trek had tired us. Sleep came easy.

The next day we enjoyed a spectacular breakfast, courtesy of Claudia, before we went exploring once again. This time we went over to have a look at some sand dunes and swim in the ocean on the windward side. 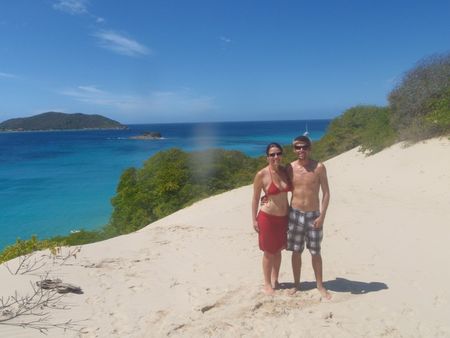 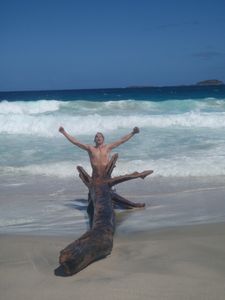 After yet another nice and relaxing day it was time to hit the sack early to be ready for the last 90 nautical mile stretch to Grenada. It would be the toughest stretch, but at least we were rested and very motivated to get to Grenada for some proper R&R before the charter starting on Feb 3rd.