With Torstein and Frode onboard and ready for action there was only one thing for us to do: Set Sail!

At 5:30am we rolled out of bed, unplugged the shore power, took a last picture and cast off. The engines purred like kittens and got us out of the marina and past the breakwater, before we hoisted the sails and shut them off. The sun was rising over the not so scenic coastline, but we still took a picture, before we dodged inside to enjoy some breakfast. The wind wasn’t particularly strong, only about 13 knots and it was coming in almost right on the nose. We were able to keep it between 30 – 50 degrees off our bow and with the current aiding us slightly we were kicking ass doing 11 knots in 13 knots of wind, or 10 knots in 12 knots of wind when we took the following picture. Our spirits were high and we enjoyed the sail northwards. There was something right about 3 Norwegians sailing north towards Norway! We did manage to find 4 knots of wind at one point and that’s when we decided to change course to unleash the fury of the 135 sq.m. gennaker. We were enjoying the sight of the well set gennaker as the wind increased, when we all of a sudden heard a sickening rip. One of the corners had torn off and the gennaker was now flapping like a punctured balloon. We got the mangled remains down and reset the normal sails. I wept a few brave tears as we stored the gennaker below deck and continued the sail directly north again. We were relatively lucky with the weather, enjoying a nice selection of what nature has to offer from sun and clear blue skies, to anvil shaped black clouds sweeping by directly above us, drenching us in a torrential downpour. Torstein and Frode admitted that they had expected a nice smooth and warm sail, but once we left IJmuiden, the temperature dropped and the wind quickly forced us to don warm clothes.  Their plan to drink a lot of the beer we had bought en route also evaporated, because though the waves weren’t big they were short and steep and everyone had to focus to stay on top of things. These kind of waves are typical in the very shallow North Sea. The boat handled them wonderfully and we didn’t experience any of the dreaded waves slapping up against the bridgedeck which everyone fears. The boat did in fact handle wonderfully and kept us on track, moving at a comfortable pace the entire time. Considering that this was the first time I was sailing the boat without the previous owner onboard I think we did very well. By the time we got to Norway we had spent 51 hours since we left the marina. Considering that we had covered about 415 nm from dock to dock, it gave us  an average speed of a little over 8,1 knots. Very satisfying. We were moving by the force of the sails all the way until we entered the fjords outside Stavanger. There the wind completely died and we had to fire up the beast below.  Moving in the fjord was absolutely incredible. The water was completely flat and the weather was gorgeous. We used the flat water to enjoy a nice breakfast cooked up by a smiling and very hungry Torstein. After breakfast we enjoyed slow motoring towards Sokn. I only used one engine at about 2800rpm to conserve fuel, so we moved forward at just under 5 knots. 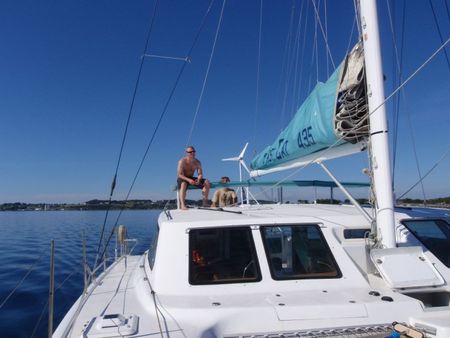 When we got to Sokn where the boat will be docked while I’m in Norway, we immediately started celebrating by cracking open a few beers: fortøyningspils as we say in Norway. We cleaned up the boat and ate another meal, before we focused on a proper celebration of the successful delivery to Norway.