Kicking it in Maryland and D.C. 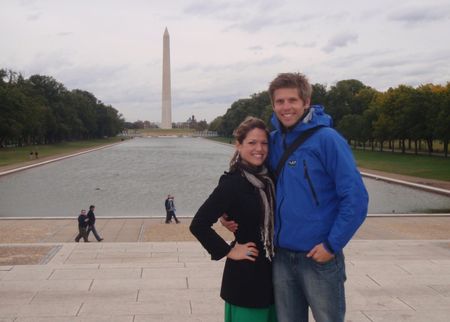 When Knut and I arrived in Povoa de Varzim, I knew he was going home to work, before rejoining me on Gran Canaria in November, but I had no idea if anyone would be able to join me for the sail down to Gran Canaria from Portugal. That particular sail is around 850nm long, so it would be tough to do on my own. This meant I had a few days on my hands to figure out what to do. I put up a notice on couchsurfing.com and wrote a crewing site, but nothing materialized. I was getting a little worried and decided the best therapy would be to do something completely different.
Lauren really wanted me to come and see her … So I decided: Why not? You only live once! This was a perfect excuse to not think about the crewing problem. The next day I boarded a flight and flew to Washington DC, where I was picked up by Lauren in her sweet ride … granted her Jeep Cherokee has the World’s most dangerous tires and breaks … but it still gets you from a to b. In the coming days it proved to be a real workhorse.

We stayed in her mom’s awesome apartment and used that as our base of operations while we were exploring the vicinity. We managed to cover a fair share of things in the 10 days I was there. Downtown D.C. was only 30 min away, so we went down and had a look at the sights: The Lincoln Memorial, The Reflecting Pool, The Pencil (I forget what it’s really called), The Vietnam Memorial, the WW2 memorial (a lot of memorials to be honest), the White House (which will soon be inhabited by Obama :-)and last but definitely not least, we went to the Smithsonian. I LOVED it. We didn’t have a chance to see even a fraction of it, but I got a tiny overview. It was cool to see the dinosaurs, the Hope Diamond, their under water exhibit and my first IMAX movie “Deep Sea”. It was a winner! Everything in between was equally impressive, so I need to go back and do it proper justice one day.
We also went to the Udvar-Hazy Air and Space museum out by Dulles. This was hands down the coolest museum I’ve ever seen. My favorites were the SR-71 Blackbird that set the record from LA to DC. It did it in 1 hour and 4 minutes. They also had the original Enola Gay bomber that dropped the a-bomb on Hiroshima. The also had a Concorde and lastly a space shuttle. On top of these amazing planes they had a couple of hundred other impressive air crafts. It was a stunning collection and very impressive to see. We also went and saw a new IMAX movie, this time we saw “Fighter pilots”. If I had seen that movie when I was in my teens, I know I’d be a pilot today.
October 31st happened to swing around while I was there and what better way to celebrate Halloween than at a house-party. We met up at a friend of Lauren’s and partied properly, all of us dressed up in costumes. It was good fun. Of course earlier that same day, I did my first pumpkin carving. Lauren did the sketching and then I did the carving. Lauren also proceeded to fry the pumpkin seeds in her own fashion, resulting in an interesting taste that only she enjoyed. At least no one will steal them from her!
On a particularly nice and sunny day, we drove down to Annapolis and enjoyed a good day walking around in the sun looking at the old town. I really liked it and what really made the visit was the awesome chilidog I got a diner. Yummy!
Besides these things, I also met most of Lauren’s family and got to hang out with some of her friends. On one of my last days there, we drove down to Salisbury and met her brother Erik and hung out with him. I learned to play beer pong and to my surprise I wasn’t completely crap at it.
The 10 days flew by. It was nice to get a little break from the sailboat and it was a lot of fun to hang out with Lauren. My crewing problem solved itself, when a guy who had called me a month earlier inquired if he could still come to sail to Gran Canaria. So when I flew back to Portugal, he was flying in on the same day.