Hanging out in New York 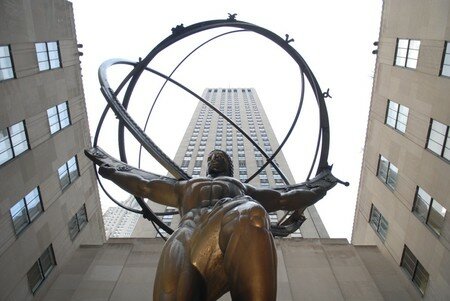 It’s up to you New York, Neeeeew Yoooork! … It was up to New York to finish up my vacation in style and send me home depressed that it was already over. It succeeded on all counts, in no small part due to my buddy Campbell. I hadn’t seen him since he was visiting Beijing in May, so I was really looking forward to hanging out again. He’d given me straightforward directions to find his office on Times Square, so it came as no surprise that when I called to find out which building he was in, that I was standing at a phone booth right outside the lobby. He finished up work and we headed back to his flat in Brooklyn. I met his flat mates and dropped off my backpack, before we headed up to a German restaurant to enjoy a nice Jaegersnitzel and some locally brewed beer. We finished off the evening at Club 4 a bar on the corner from his house. The next morning everyone was out of the house by 9 a.m. giving me time to have a slow start to the day. I grabbed a bagel in a small shop and was downtown around 10:30 a.m. My original plan had been to eat on the subway, but seeing that it was packed I opted to wait till I got to Manhattan. On my way to Campbell’s office I stopped by Bryant Park and watched some ice skaters while I ate my brunch bagel. We were supposed to return to the same ice skating rink at 11 a.m. together with a class of first graders, but the weather changed, so when I stepped into Campbell’s office at 11 a.m. we had a mix of rain, hail and sleet assaulting anyone out in the open. The ice skating was postponed and I headed over to MoMA and spent a solid portion of the day looking at art. By the time I was done there I walked back to Campbell’s office dodging the rain by popping into every book and electronics store I passed on the way. Campbell and I headed straight over to a classy sushi restaurant where we enjoyed some tasty sushi washed down with Japanese beer and Sake. After the meal we went down the street to 2econd Stage theatre and saw Peter and Jerry starring Bill Pullman and Dallas Roberts. It was a very solid play that we both enjoyed. The next day had an even lazier start to it for me and I actually found myself with space to sit and enjoy my bagel on the subway. I originally planned to look at the New Museum on Bowery, but I was there at 11 a.m. and they opened at noon. I therefore headed up to Chelsea and popped into every gallery that was open. I saw some stuff I really liked particularly at the 303 gallery. From Chelsea I headed up to midtown where I hung around window-shopping for a few hours, before I headed up to 84th street to meet up with Campbell’s buddy Conor. We grabbed a few Brooklyn Lagers while we waited for Campbell to arrive. I used the time to wrap a present for Campbell and some Christmas presents that I was bringing back to Beijing. When Campbell arrived our original plan was to shoot off to a place that served good BBQ, but when Conor informed us that a friend of his had cooked a chili on a deer he had shot a few weeks ago, we headed straight there to reap the rewards of Conor’s hunting skills. It was excellent. We used the chili apartment as a rendezvous point for everyone heading to the Deep Banana Blackout concert afterwards. Before soon we were a good bunch of merry men shooting off in taxis towards the Bowery Ballroom. I didn’t know what to expect when we got there, except I was told that Deep Banana Blackout was a talented funk band. They weren’t kidding. The music was excellent. I also loved the venue, so everything really came together. We danced, sang and drank. After a while I was feeling the room shrinking, so I knew it was time to slow the drinking. Instead I went to the coat check and picked up my camera. 100 exposures later I was feeling on top of my game again. By then the concert was coming to an end and we were getting ready to hit one last bar before we headed home. The bar we targeted was a good choice. We enjoyed more beer and had a great finishing dance, before we headed home. We were hungry for food but by the time we got back to Brooklyn, even the 24 hour diner had closed, so we dove to bed on “empty” stomachs.

The next morning Campbell and I returned to the 24 hour diner and enjoyed 2 great omelets. It was hands down the best one I’ve had in years. When the meal was over it was time for parting hugs, before I boarded the subway and returned to JFK. 5 weeks of traveling was officially over when I landed in Beijing 14 hours later. It had been an excellent vacation filled with contrasts. I had enjoyed luxury dining on a cruise ship, eaten palm tree worms in the Amazon. I had been diving, climbing mountains, riding mountain bikes and sailed several different sailboats. I had been in hot and cold weather, high and low climates. In short I had experienced a good variety of things and I was more than happy. I was also really happy to get home. Though it’s nice to travel, it’s nice to get back home to chill out again. My only question now: Where will I travel next? … Philippines, Laos, Cambodia, Vietnam? … We’ll see! =)