First overnight on the Great Wall After having a great time in Sanya and a few nice days in Beijing, it was time to top off my brother, Martin’s, visit with an overnight on the Great Wall. Though this was my 4th time on the Wall, it was the first time I’d head up there to sleep.

Last time I went when my mother was visiting it had been absolutely freezing on the Wall, but it being March now, we hoped the temperature wouldn’t be horrendous. To get there we caught bus 916 to Huairou, where we hailed a taxi that took us to Jiankou for 40 RMB. We were dropped off by a restaurant and from there we had a relatively steep climb up to the Wall. The only warning we had received prior to going was to keep left, if not you could get lost. We kept left, but still managed to end up on the wrong trail. After a bit of bushing, we managed to climb onto the Wall. Once on the Wall we headed towards Mutianyu, though the plan was not to go all the way there, but to stop somewhere in the middle. The walk on the wall wasn’t too strenuous, but a bit hairy in places, because you could seriously hurt yourself if you fell. The section of the Wall that we were walking on was built in 1368 and hasn’t been renovated like other sections of the wall have. The walk was excellent and after an hour or so we came upon the tower we wanted to sleep on top of. We picked it, because the view was awesome, it had a nice flat roof that hadn’t collapsed and because sunset was approaching and we really wanted to do some tightrope walking on the actual Wall.

Once we decided upon the tower, we dumped our backpacks and ran to find a suitable spot to tightrope. Luckily we found one nearby and quickly suspended the line and started tight roping. It was a pretty unreal location and a lot of fun. We kept at it until right before the sun set, then we headed back to set up camp before darkness ascended. 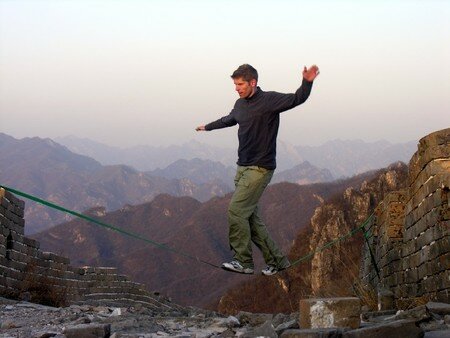 We had brought a ton of supplies with us and knew we wouldn’t starve.

We made a nice dinner on Martin’s camping burner that filled us up nicely after a good day of trekking. Then we continued the feast by stuffing ourselves with chips and chocolates. Very enjoyable. It was incredible how dark it became when the sun set, but my brother had just invested in an Optimus gas light, that we lit. It gave us good light and added to the ambiance. We set up sleeping area on the flattest part of the roof. From the loose bricks scattered on the roof we were able to construct a small wind-wall, so that we would be well protected if the wind changed.

After eating dinner we crawled into our sleeping bags and continued snacking and chatting from there. I had purchased some loud fireworks that we set off. They looked like sticks of dynamite, but when you lit one, there was first a small bang as it was thrown into the air and then a much louder bang when it exploded far above our heads. The temperature was not bad for March, but we had brought warm clothing and though my brother had his winter sleeping bag, I was sleeping in 2 summer sleeping bags, hoping it would insulate enough. This proved just a tad cold and I spent most of the night awake shivering. I did however fall promptly asleep when the sun rose and its warming rays made the bags super comfortable. My brother let me sleep for a few hours, before we enjoyed a nice breakfast. Afterwards we packed our gear making sure we didn’t leave anything behind. Then we set off to Mutianyu. At first there was a small climb up to the tallest part of this section, before we could enjoy nice downhill walking for the rest of the way to Mutianyu. When we got down to Mutianyu the Wall looked completely different. We came from the raw and wild Wall to the developed and touristicated Wall. The walk down to get a taxi was very easy and we completed this part of the trek much faster than expected. This worked out well, because in the evening I had invited all my friends to a housewarming party in my new flat in Chaoyangmen.
The Trek and overnight on the Wall had been awesome and we were both very happy that we had done it. Sleeping on the Wall like they did so long ago had almost a magical feel to it. We agreed that together with the Sanya trip, this had been a great adventure.