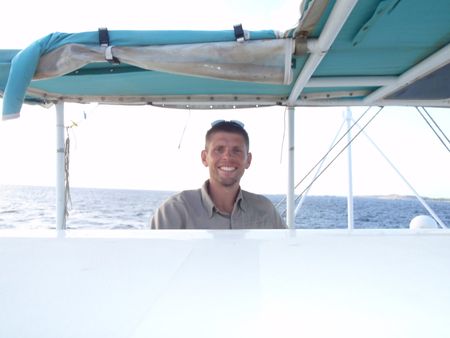 When I last posted I was in high spirits, because the boat was ready and it was time for me to head to Curacao to start my Christmas charter. I spent Saturday finalizing all the things that needed finalizing, getting everything sorted and in order. When I cast off from Aruba Nautical Club I felt great. There were a couple of things that worried me:

The trip started very nicely and though my speed was a laughably slow 3 knots, sometimes sinking as low as 2 knots, I was still making progress. Shortly before rounding the southern tip of Aruba and darkness ascended that changed. The seas built and the wind picked up, the current had been a fairly constant companion, so I was used to the 3 knots of drag. I inched forward and was happy to see the distance creep down on the GPS, no matter how slow it was going down. The boat was handling the big seas without problems. She’s built for MUCH worse weather, so 3 meter waves isnt even worth talking about. It must be added though that 3 meter waves is the worst they’ve had in almost 3 months, so I went on a “great” night.

In the middle of the night I heard a big bang and then a whirring sound that lasted about a minute, before another loud bang was heard. Then all was quiet, but my speed dropped to 1.2 knots. My suspicions were confirmed when I went forward and a had a look at my anchor … or rather, where my anchor had been. It was now hanging 115 meters under the boat, at the end of my anchor chain. Luckily the depth was 1000+ meters, so I had little to fear, except for the time wasted winching the anchor in again.

This was nothing compared to what happened next. Shortly after sunrise, both my engines started “coughing”, along with the RPM’s going crazy. Then they both stopped. I rushed inside and couldnt believe what my meter was saying: My fuel tank was empty … I hurried forward and poured 40 litres into it and started the engines. Or to put it correctly … I tried to start the engines, but they only sputtered and then remained off. I was seriously confused, so I headed in and checked out the port engine and bilge … no surprises there … When I opened the starboard bilge, diesel fumes from Hell assaulted my nostrils and I nearly threw up. Some people get their rocks off on sniffing glue and gasoline, I’m not one of them. I hurried up on deck and got some fresh air, before I headed back down to check out the engine. It was basically swimming in oil. My bilge pumps were busy pumping all the oil and diesel overboard, so by now I was looking like a mini Exxon Valdez, minus the fact that I didn’t run aground (Thank God). The fumes and heavy rolling made me seasick, so I needed to make a couple of trips up on deck to vent my dinner, midnight snack, breakfast, etc. I felt like crap and quickly decided that there was little I could do to get the engines running. Instead I hoisted the sails, which is no small affair when you’re sailing solo … without an autopilot. I then proceeded to tack back and forth to get closer to Curacao with very limited success. In 5 hours I had gained about 3 nautical miles, had been squalled twice and had seen my sails taking some severe lashings that I made me really worried about them. I had also been awake for over 30 hours and felt very depleted. I knew that it would take me at least another 30 to tack back and forth to get me the remaining 18 nautical miles to Curacao. I was on the VHF with Curacao coast guard and together we made the decision that I should return to Aruba. It was with a very heavy (and exhausted) heart that I pulled down the mainsail and set my course back to Aruba.

I was very down when I recorded that. I had been quite emotional right before, when a school of dolphins came up and played around the hull. I hadn’t slept for 34 hours, I was already hearing and seeing things, so I did the only proper thing: I started crying, because they were so beautiful to look at. I think my exhaustion was fairly complete. Having said that, the sail back was awesome. I had wind, waves and current with me and did between 8 – 11 knots (hitting 13 on a surf) the whole way back using only my genoa.

When I got within reach of Aruba Nautical Club, my friends there: Ian, Westa and Tom saw me and radioed me. I told them the whole story over the VHF and it felt good to share. It was kind of like group therapy. I was hoping that the Coast Guard could tow me back into Aruba Nautical Club, but when they showed up it turned out to be the maritime police in one of their super fast RIBs. It was kind of surreal, because they told me they couldn’t tow me into the Nautical Club, but that I was to sail to Oranjested where they would pull me into the anchorage there. Then they spotted a drug runner … or as they put it: “a contact” and then they shot off to pursue, while I sailed to Oranjested. They got back just as it got dark and then they guided me and … towed me to where they though was perfect. In spite of every other boat around yelling that I was in the middle of the cruise ship channel, the police told me to drop anchor and so I did … I’ve made it a policy not to argue with people that can shoot me and say that I “went for it”. I then got to ride in their superfast RIB in the dark as they drove me a top speed through the mangroves to customs and immigration to check in. It was actually really cool … It’s funny how the boy comes out in you when faced with high speeds.

When I got back onboard my boat, I tried to eat, but I technically speaking hadn’t eaten in 38 hours (since I had sacrificed all the food I had eaten when I got seasick), so I got down half a sandwich, half a Bounty chocolate bar and a can of Mountain Dew before I collapsed in bed. I normally only sleep for 7 hours, but now I slept for from 8:50 pm till 7:00 am … With only one break, when it started raining in the middle of the night and I got up to check that all hatches were closed … which is a bit ironic, since I had just come from a passage where if any of them had been open I would have had a TON of water inside very quickly, but hey … no one was there to argue with me.

The next morning I woke up and found out that sure enough: I was in the middle of the channel that the containerships and cruise ships use when they exit the harbor.

It luckily doesn’t take much for me to bounce back from being über down, which was how I felt when I recorded the video on returning to Aruba. A good night’s sleep solves most problems. Not to mention a:

After the pool, I met Clifford, my trusted clutch mechanic. We had a proper look at the engines … I explained my theories and then he added his knowledge and we came to a conclusion. Basically this is what we think the problems are:
1. Contaminated fuel. So I need to empty out what I have, clean the tanks and clean the filters.
2. A broken fuel line. Probably on the crossover line running between the two fuel tanks. I need to find the leak, and fix it … if I can’t find the leak, I need to change the fuel hoses, which could be a big job. When Clifford left I made myself some dinner. My staple dish: Tuna, pesto and pasta turned out very well, I got so excited that I even spilt a little on the stove. It filled me up and made me happy. Now I’m typing with dropping eyelids, so I need to hit the sack. I am not going to be unemployed tomorrow, that’s for sure. I need to sort these issues out so that my engines are running at 100% and then I need to get going to Curacao as fast as possible, so that I can get on with my charter, scheduled to start on the 16th. Luckily the weather forecast is looking much better for the coming days, so a better passage is on the horizon 🙂 This is where I’m right now … sleeping soundly in the center of Oranjestad.