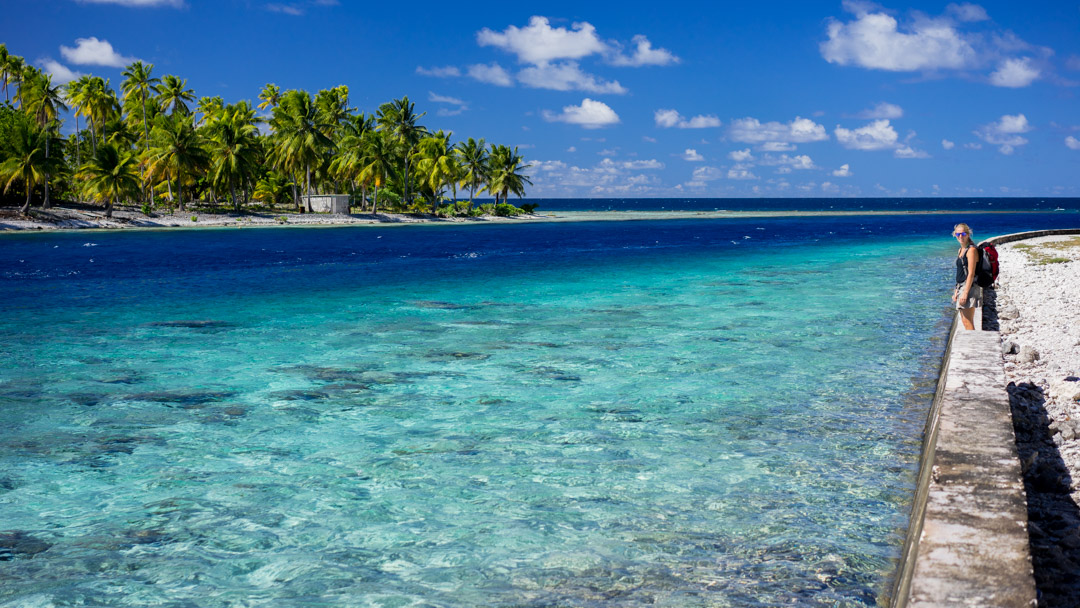 When you sail off the beaten track you always hope that you’ll find someplace truly special and our search can stop, because we’ve found the perfect unspoilt South Pacific paradise and it’s called Amanu. Amanu was our first stop in the Tuamotos after sailing from Gambier. Granted we could have stopped in a couple of atolls before, but they either had no pass (so you have to anchor on the coral reef on a shallow shelf with a steep drop-off to 1000 meters at the mercy of wind and waves) or were off limits thanks to the French having tested nuclear weapons there (More about that here).

If you wonder what an atoll is, look no further: When a volcano or seamount sinks into the ocean and coral forms on top of the circular rim (caldera) then you get an atoll. All of the atolls we will visit will have a pass or opening in them, so that it’s possible for us to sail into the lagoon inside. The crazy thing is that the depth outside the atolls normally range from 1000-2000 meters, but the lagoon inside the atoll, rarely exceed 50 meters in depth. So the atoll really sits on top of a mountain (or extinct volcano). Since the Pacific Ocean is right outside the atoll it doesn’t feel like we’re in a lake on top of a mountain, but once you exit the pass it becomes prudent not to drop anything over the side.

When sailing from Gambier and into the Tuamotos, if you want to stop at the first possible atoll you can get into, you have the choice between Hao and Amanu. Hao is larger, has a little over 1000 inhabitants, a few stores, 2-3 restaurants, an airport and a high school. We decided to go to Amanu, which has just over 100 people living there, with 2 small stores, no restaurants, no airport and only schooling for small children. It proved to be a wise choice. We were not going there alone, as 8 of the other boats leaving Gambier at the same time were also going there. Normally only 5 boats comes through every year, so imagine their shock when 8 showed up in 2 days.

On our way to Gambier we had some very special visitors swimming around the boat for over an hour. Two large minke whales. When they left us we approached Amanu and had to concentrate on getting into the atoll.

The trick when getting to an atoll is finding out when to enter and later when to leave. Timing is everything, because most atolls only have one or two passes you can enter and exit through and with the amount of water moving through the pass at high and low tides, the tidal current moving through the pass can move at over 10 knots. We’re very hard pressed to go faster than 7 knots under engine, so with 10 knots moving against us, we don’t have a chance. I had pulled up my trusted Navionics map app on the iPad, which includes tide-tables. They proved to be a “bit” of a disappointment, because not only was the timing completely wrong, they also got high and low tide mixed up, so on all counts they failed. I later tried to talk to locals, but they didn’t have any clear cut answers, so the safest approach is the banana peel test. Sail up to the pass, eat a banana, throw it into the water, if it floats in the direction you want, great. If not, have another banana and wait till it does.

When we got into the lagoon, we motored over to a beautiful spot and dropped the hook. Shortly afterwards we went into town and were greeted like long lost relatives. The first person we met was Sandy. He immediately got a few coconuts down from the nearby palmtrees and opened them for us to drink and eat.

We agreed to meet him the following day for some spearfishing. The spearfishing in Amanu is amazing. It was nice to be able to spearfish and be able to eat the fish, because in Gambier, you were not so lucky, read more about what caused that here. The only thing I had to get used to was spearfishing with loads of sharks swimming around you. Sandy was a great spearfisher and turned out to be the best one on Amanu, so we couldn’t have found anyone better to show us how it’s done. He showed up with a plastic box that we dragged around with us when we swam, where we put the fish in. It worked really well and though the sharks were curious, they never got frisky. Sandy told us that the key thing to not attracting sharks, no matter what size, was to be calm. He said it doesn’t matter if it is a 50 cm long reef shark or a 4 meter long tiger shark: remain calm, swim slowly and make careful movements. He added that with dangerous sharks like bull, grey and tiger, it’s also important never to let them out of your eyesight, so when you see a dangerous one, you immediately stop spearfishing and slowly retreat to your boat, but at all times keep your eyes on the shark. The reef sharks on other hand need no such precautions. After a couple of hours in the water with Sandy we had shot 19 fish … he shot most of them, but I’m proud of the 3 I got.

The following day we were invited to town hall, where the mayor hosted all the sailors for dinner. All the fish we had shot the day before ended up on the table.

The next week was spent exploring the lagoon. First we went to the eastern side with a catamaran named Duplicat. There we met a French catamaran named Wakame and we went spearfishing and had a nice BBQ on the beach where we ate the fruits of our labor.

This overnight trip was immediately followed by a sensational roundtrip together with Moana. He had already been a great friend to Coco de Mer, when they were on Amanu a couple of weeks before us, so when he heard we were friends of them, he took us in like family. Duplicat joined us for the roundtrip, so we were two boats doing the journey. The trip with Moana was nothing short of spectacular. First we went to the star of Amanu (Piton) also known as the “navel” of Amanu. The saying is that before you’ve been to the star, you haven’t been to Amanu. The star is a submerged star-shaped reef with loads of fish surrounding it. We anchored there and went into the water with our spearguns. We got 10 nice looking fish, before we had to abort, because a 3-meter-long grey shark started showing interest.

We lifted anchor and went to the north west corner of the atoll, where we dropped the hook for the night. We put the fish on the BBQ and enjoyed them with a couple of beers while the sun sat. There was to be no rest for the wicked, because we now put on reef boots and headed to the outside of the reef. We waded on the reef, looking for lobster. Unfortunately the tide was a bit too high, so we were wading in water coming up to our stomachs, walking in pitch blackness with only our headlights to guide us. Trust me when I say that I heard the theme to Jaws in my head more than once. Though we didn’t catch any lobster, it was quite an experience and the conclusion was that had the tide been lower and the moon completely blacked out, we would have caught lobster.

The following day Margrethe, Rick (from Duplicat) and I snorkled the pass, while Moana went spearfishing. He got a nice selection of fish, but cut it short when a 2-meter-long grey shark started circling. We then lifted anchor and moved to the north east corner of the atoll, where we visited an abandoned village. Here a couple of Moana’s cousins were gathering copra. Moana wasn’t too optimistic about how hard they were working, because he said: “no boss, no work”. He was not surprised when we walked up to the hut they were using, where we found them all playing cards instead of working. They pulled down some coconuts for us to snack on and some more for us to bring back onboard, before they dropped us off back by Stella Polaris.

We then proceeded back to the village, where Moana hosted us at his home for another fantastic dinner with the fish we’d caught. It’s a shame that the bandwidth is too small for us to upload videos, because we have some sensational footage from spearfishing and from singing and dancing during the dinners, but I’ll see if we can’t upload that when we get to Tahiti in a month.

Four other boats: Pirlouit, Inti, Abraxas and Masquenada were anchored at the south end of the atoll. We decided to join them, because the winds were picking up and the village anchorage was getting rough. Anchoring in the atolls can be very challenging at times, because of large patches of coral reef and coral heads that poke up from the sand. We always anchor in sand away from reef, but staying away from coral heads can be real difficult. We lift our chain with fenders or hard balls and do what we can to avoid getting tangled, but once in a while it happens and then it can be real difficult to get loose. We normally dive in the water as soon as we’ve anchored to make sure the anchor is dug in and that the chain isn’t wrapped around any coral heads. On this particular day it proved extremely hard to get the anchor up, compounded by rough waves and strong wind, but in the end we prevailed.

When we got to the southern anchorage all the men from the different boats went spearfishing. Jonathan from Inti, whom we went horseback riding with on Easter Island (read more about that here) and I shot 9 fish and Steffan from Abraxas shot 1. This set us up for a sensational beach BBQ in the evening. The following day we moved back to the the village anchorage and got ready for our last day on Amanu.

Margrethe and Camilla were taught to make shell necklaces by Vaihau (Moana’s wife). They sat like good pupils in the classroom and worked hard. Vaihau made beautiful shell necklaces that we were given as farewell presents. In the evening we had another sensational dinner at Moana’s place, this time we shared it with Silverland, who was also leaving the next morning.

The BBQ was overseen by master chefs Moana and Sandy, who went at the job with the precision of the finest chefs from the best restaurants on the planet.

Our time on Amanu was at an end, not because we wanted to leave, but because we are traveling and in order to travel, you need to move on. Amanu has shown us that real hospitality exists and that the Polynesian spirit is very much alive. Our visit on Amanu was very special and it will be with us as one of the highlights of the trip this far.