I had one thing on my agenda when I came back to Norway: Metal! The family might complain about this fact, but it is true. I had 2 music festivals lined up that I was heading off to almost immediately after touching the ground. 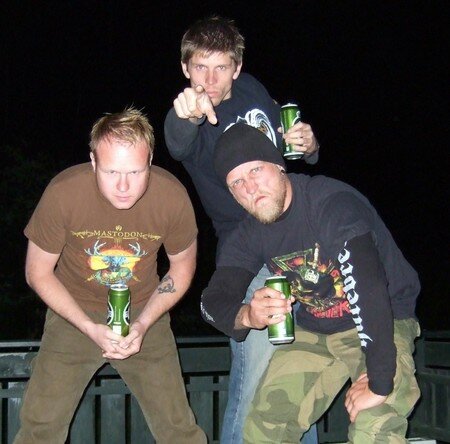 I met up with Vidar and the two of us did some preliminary planning … which basically consisted of discussing which beer and booze to bring, before Jan Petter picked us up in his car and we headed down south. First stop on the journey was Jan Petter’s cabin right outside Kristiansand. We had a little warm-up party for the festival we’d hit the next day. Our warm up consisted of listening to music at levels that threatened to destroy the stereo, followed by a steady stream of beer and Jack. We topped of the evening by an obligatory wrestling match and “proud to be Norwegian” pictures … probably not our proudest moments as the pictures do tell. In our defense I have to say that it was late, we were very drunk, testosterone had taken over … and no one else was within 5 miles of the three of us. The next day we got up early … riiiiight. When we got out of bed, we had a proper metal breakfast to get us in the right mood. 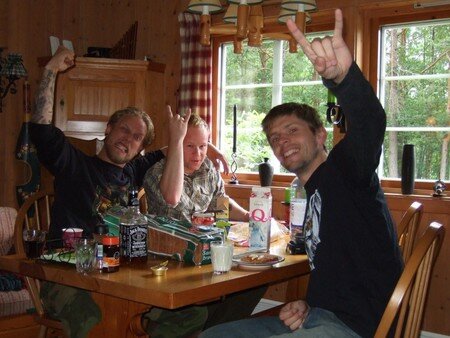 Feeling well fed and happy, we drover over to Tronøya and the Hove Festival. We were there to catch the following, winning, line-up: Keep of Kalessin, Cynic, Slayer and Mastodon. One word sums up the day: Unbelievable! As soon as we entered the festival area we met up with Markus, a good friend of mine, who had just moved back to Norway from Beijing. We kicked off the festival experience with Keep of Kalessin: good black metal from Trondheim.

We followed Keep of Kalessin up with Cynic, before we got to my favorite concert of the night: Slayer.

By the time Slayer stepped on the stage it was raining like there was no tomorrow, but I honestly couldn’t feel it. The only thing I felt was awesome music, a tremendous atmosphere and a very lively mosh pit. After Slayer we chilled out and enjoyed more beer. While we were waiting for Mastodon to start Vidar and I were seen standing, leaning against each other, sleeping. Thank God no one took a picture.

The Mastodon concert more than woke us up and we could head back to the car in musical ecstasy. Now you probably think that we were planning to drive back to the cabin … Hell no … We had difficulty walking, so driving was out of the question. Instead we stretched out inside the car and promptly fell asleep. The next morning we woke up feeling great … Not … We waited until we felt fairly sure we couldn’t get busted on a DUI and then headed back to Stavanger.

There was to be no rest for the wicked, because I basically came home and went straight to Christer’s 30th birthday party. It was a nice BBQ affair, featuring a painful speech by Kåre, lot’s of great food and ample amounts of beer.

The next morning I jumped on the train and headed to Kristiansand and the Quart festival. The line-up here was also heart warming: Black Debbath, Meshuggah, Machine Head, Chris Cornell and Ralph Meyerz. I was meeting up with Maiken, because she had an awesome place to crash in the middle of town, 5 minutes walking from the festival area. It wasn’t actually her place, but her friend that owned the place was cool with me staying there as well. All was set for an evening of mayhem. We kicked it off with a friendly lunch consisting of bread and beer. Then we headed over and saw Black Debbath, immediately followed by Meshuggah, but by the end of their concert we were getting hit by a torrential downpour. My clothing wasn’t exactly water resistant, so when I chanced upon a garbage bag, I immediately grabbed it and put it to proper use. We made a tough call to go back to the apartment and towel off instead of seeing Skambankt, but it enabled us to be dry, fed, happy and ready for the evening, since we could don proper clothing. We got back to the festival area just in time for the band I had made the journey down to see: Machine Head. They did not disappoint. They gave everything, and more, and made the whole trip worthwhile.

After Machine Head, I headed over to see Chris Cornell. I also met up with Helle and Hedvig, whom I hadn’t seen since we celebrated the 17th of May together in Beijing. It was great to hang out with them again and it definitely made the concert more enjoyable. Chris Cornell delivered a solid line-up of hits from both Soundgarden and Audioslave and I think everyone left happy. 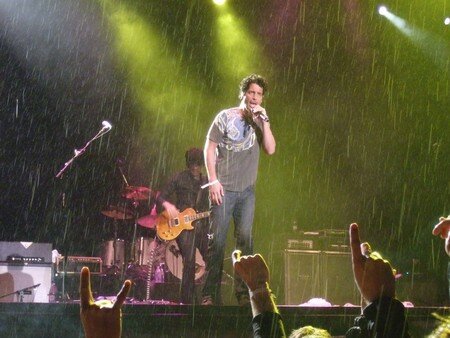 It did rain a lot during the concert, so we were happy to head over to see Ralph Meyerz at the only inside venue. It allowed us to dry off, while we enjoyed their groovy rhythms. It was an awesome evening. It’s awesomness was tested the next morning, when I nearly missed my train back to Stavanger … Nearly … I had to haul ass through the streets to make it, but I did, with 2 minutes to spare.