After having spent so much time in the mountains, desert and off the beaten track I suppose it was to be expected. I just couldn’t hack having 1.3 billion Chinese around me and in the airport on my way to Beijing it boiled over. There I was waiting in an overfilled departure hall with no A/C. The loudspeaker was crackling constantly and I had to listen in just in case my plane was leaving early (yes, that happens here) or the usual late. In this mass of people one 9-year old had made it his mission in life to make the wait a living Hell for everyone. The worst part of it was that his mother thought it was charming, probably thinking along the lines, that boys will be boys. Well, 2 can play that game, so when he came sprinting by yelling and screaming for the n’th time I shifted my weight slightly, extending my foot unnoticably forward. Result: I am a bad person! Screaming and kicking as his mother carried him outside with fresh carpet burns, I couldn’t help but feel deeply content. The best of it was that if anyone else in the departure hall had seen what I did, I’m sure they would have awarded me the silver star of bravery … his mother was somewhat scary looking, so the consequences of getting caught would have been … severe!

Getting to Beijing was interesting. I was expecting a gem of a city filled with history and culture. It was … but it was also the smoggiest city I have ever been to. LA is nothing compared to this! It’ll be interesting to see how they deal with this in preparation for the 2008 Olympics. When I had walked through the Forbidden City, which was vast, amazing and even with 10,000 tourists seemed empty, I walked up on a hill behind it and was surprised when I got to the top that due to the smog I actually couldn’t see the Forbidden City. Visibility was in other words less than 2-300 meters! I still really liked Beijing though. The American I travelled with in Xinjiang to the desert and to Kashmir had worked as an English teacher for a year in Beijing, so he put me in touch with his friends. An excellent bunch of guys. Two of them were learning Chinese, on leave from the US State Department(Read: CIA … though they both fiercely denied this when questioned after a few beers). Together with one of them I went to a Crystal Method concert. Going to a techno concert can be interesting enough,but do it in China and you have dynamite. The Crystal Method were so full of themselves it was almost painful to look at them, but what was painfully obvious was that when they handed out good dance moves, the Chinese were in the wrong line. Now I am no Travolta, but I know a move or two, but was almost unable to use them, because I was constantly trying to suppress an urge to keel over laughing. It didn’t make it any better when the guy I went with started taking the piss. I know, I know: I’m a bad person. The illusion that Chinese are small, nimble and agile was crushed. Mao said that if you haven’t been on the Chinese Wall, you aren’t a true man. So now I am a true man. I did a 9 km walk on the wall in scorching heat. The pictures look exactly like you’d expect. One good or bad thing about Chinese, depending on ow you look at it, is that they are lazy and really see no point in walking along a wall if you can walk on it quickly and get back into an air conditioned car. This means that I along with a few others had the wall virtually to ourselves when we walked along it. Very enjoyable!

One of the guys was working his first night as a DJ at a very cool bar and like a new best friend I showed up, dragging half the hostel I lived in with me. I think I met all the x-pats in Beijing. A good, if somewhat interesting bunch. The beer was good and it flowed in rivers and after I meet a few Scandinavians, the Long Islands started flowing as well … let’s just say that I didn’t make it to the Summer Palace as planned the next day! What also surprised me, because you’d never believe it when you watch a Hong Kong action movie, but China is actually REALLY safe. When stumbling home from the bar at 5 am, I took a short-cut through a dark park and being somewhat alert I was surprised when the only one that passed me in this heaven for a rapist was a young girl, who smiled as she walked by. I was nothing short of perplexed! This has been confirmed time and time again when I get lost and walk down dark alleys only to have the shady people in them look at me in a mixture of fascination and curiosity. 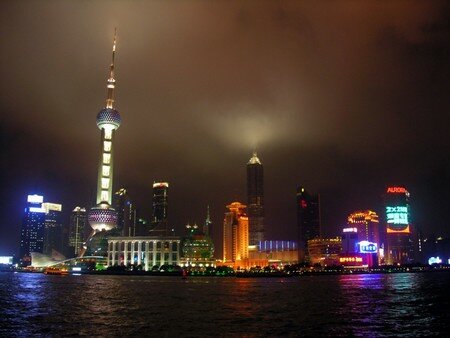 After having a good time in Beijing making valuable and interesting contacts I went to Shanghai. A city taken straight out of Blade Runner.This city is by far the coolest looking city I’ve been in. In fact it looks like a city of the future. Tall glitzy skyscrapers, the future hub of China and a jewel that they definitely want to show off. The nice thing is that despite this there is still great history to be found if you look. Granted you need to hurry and see it now, because like in Beijing, they are tearing down old buildings, rebuilding them often looking exactly like they did before, only new and clinically clean. This city like Hong Kong is one of the few Chinese cities where white people are normal and you don’t get the open mouthed stares you do elsewhere (even in Beijing). It’s funny, but in the Forbidden City I almost felt like a movie star, because so many Chinese asked if they could get a picture with me! … It went straight to my head! The best was when they in good paparazzi style tried to take a sneak shot of me while walking by with their cell phones. Classic!

Shanghai, like Beijing, is a popular tourist destination for the Chinese and the city is filled with them. I quickly realized that coming in July when they have summer vacation is perhaps not the smartest move. There were also a ton of beggars on the streets and if you’re white, well, prepare for an onslaught. My trick to loose them was to walk fast seemingly lost in thought and if that didn’t work,then I’d drop a coin “by accident” forcing them to stop while I made a clean getaway.

Now I’m back in Ningbo hanging out with my new friends here. It’s drunken debauchery from we get up till the sun rises. It’s a good way to end a vacation! I have yet to wake up in the bar again, but it’s not from a lack of trying. I’m here till Tuesday and then I’ll make my way home again. Oh, listen to this: I went and got my hair cut yesterday.This time it included a 40 minute upper body massage, ear cleaning by a doctor (yes, I can hear again … it really was disgusting to see how much crap he pulled out of what I thought were my Q-tip clean ears), ahead massage, scalp treatment, a facial (no I’m not queer, I didn’t know it was included until she started applying all sorts of crap to my face … but it felt good, so I neglected to stop her), haircut and 2 hair washes for … 50 kr or about $8. … If I lived down here I’d get my hair cut once a week! Today I’m going for a massage! … Not one of those pink ones with “happy endings” … 😉 but a proper Chinese one done by blind people. I can’t wait!

I’ll probably send one more travelling diary when I get home, with some pictures. Though I’ve tried to paint some pictures for you, it’s always nice to see what things look like, to see if the images match what I described.