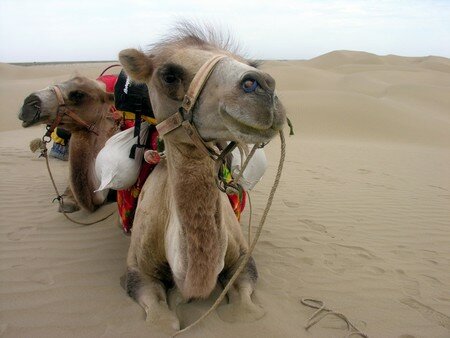 Good news and bad news … I found Kashmir and the Pakistani border,but was outfoxed by Osama. I have a feeling I was hot on his trail, but I was left in the dust. So it looks like I won’t be able to claim the reward money of whatever ridiculous sum his bounty has been set at. I did find sympathizers though, who had no problem sharing their view of how crap Bush (and the West) was and how great Osama was. I nodded along and feigned disinterest … everyone of Uighur origin in Kashgar(about 90% of the population) carries a knife and I wasn’t in the mood to get into a squabble while on vacation! Having said that I am now a proud owner of a knife and two carpets (I’m sad to say that they can’t fly) … I went to the Sunday Bazaar and went a little shopping crazy! Bazaars are great! I spent a good two hours buying the carpets and after tears, threats, tea and pleasantries had been exchanged I walked away with two great looking carpets of high quality (I have of course become an “expert” on carpets), having paid what I think was a good price …The seller is probably still laughing and smiling as he walks to the bank … Bastard! Still, I paid less than I would for 1 crappy IKEA carpet at home, so I’m happy!

To backtrack a bit: I ended up heading into the Taklamakan desert before going to the Pakistani border. The desert was fantastic. Not having too many dry spots in Norway (and none at all in Bergen where I’m living now) it was nice to mount a camel and head out into the sandy sea. I have now spent many hours in the saddle of a camel and slept on top of a huge sand dune under the open sky. Let’s just say that it’s easy to compare the sea to the desert: Both are endless and the night sky looks magnificent… oh, and without wind they both get damned hot under the blazing sun! I also swam in the most dodgy looking brown river I’ve ever seen, so if I die for some unknown reason, assume the microbes got the best of me.

Having returned from that I headed into the mountains together with three others in a 4WD. Having grown up in Norway, been through B.C. and Alaska and seen the Alps on top of that, I was fairly certain that I wouldn’t be too impressed by the mountains here: Well, I was wrong as usual! Take iron red mountains, throw in huge sand dunes, add soaring peaks with snow caps … well, then you have what I witnessed. It was nothing short of breath-taking.

It actually really was physically breath-taking because of the altitude. The three others I travelled with all got sick from the altitude and spent at least one night running to the bathroom throwing up and spraying the bowl with diarrhea(sorry about the visuals). Up here I got to ride a horse around a Lake called Karakul (The Black Lake) as the sun was setting in the peaks. I got a horse named el-diablo (I wish at least) and together we ditched everyone and rode like the wind. We slept in a small local village enjoying the hospitality and cooking of some locals. I really can’t explain how fantastic it was. Since the others were affected by the altitude, I went hiking on my own and walked to the top of the near estaccessible mountain. A good friend of mine died 2 weeks ago and in his memory I built what we Norwegians call a “Varde” out of stones and since the locals didn’t have a proper name for the top, I renamed it”Jon’s Toppen” in my friends honor. It was actually very sad and I was happy to be there by myself. Now I have left the Xinjiang region, but my update from Beijing and Shanghai will follow in the next and probably last Travelling Diary. I can promise madness, concerts, acrobats, Kung Fu and world class Beijing Duck.